Ways to Maximize the Benefits of the Four Pillars

The Teachings of the Ascended Masters are vast beyond what people can ever imagine. Where then does one begin?

There is a pathway through the immense tomes of instruction available. There is an ordered progression that makes the work more accessible. We present a series of helpful keys, that your journey be reduced in its potential for burden.

This information has been assembled by those who have walked this path ahead of you, and who have discovered some hidden gems in unexpected places. We present them for your consideration here at the beginning of your journey.

There is an Ascended Master who is the Guru of all of us at the beginning of the journey. His name is El Morya and his love for you is greater than you can know at this time. We love him dearly and hope that you will come to know him as we do.

On October 14, 1985, Beloved El Morya gave a dictation titled, “Universal Religion” which is published as Volume 28 No 51 in the Pearls of Wisdom. At the 33 minute mark of his speaking we receive these words,

“If you are forgetful and unmindful of the pyramid that you build—the pyramid on which you stand as an initiate—then you will go back to the first step. For you see, a mighty substructure must be beneath the one who would stand on the Great Pyramid and be the capstone for the world.

Thus, we are building. The tenth lesson does not replace the first. And if you neglect the first, your foundation will begin to crumble. Order, then, is the first law of heaven as the first law of the path of initiation. Do not forget your first exercises or pieces that you have learned. These are foundation stones.

More than anything else, we desire to see the building of the inner temple of man. When your outer building ceases to reflect the inner building, then things go wrong. You are burdened.”

Very simple and straight forward, certainly logical. Let us begin with the key that was found inside Saint Germain’s, “Sacred Ritual for the Creation of the Cloud”.

"If you are new to the teachings of the ascended masters or you are teaching students who are new, begin with beloved Kuthumi's book on the human aura and Alchemy I, and then proceed with Alchemy II and then go to Aura II! These four books are pillars, foundations for the fourfold Path of the Rose Cross that later is to be read in the Pearls of Wisdom from Sanat Kumara."

This is why we created the Four Pillars website. If you are on this website you have probably been through the “Beginner’s Class” video series and you have a bit of an idea about who you are as a spiritual being. Reviewing those videos is highly recommended. To do so once a year will surprise you with the new levels of understanding that you gain each time. The same is true with these Four Pillars. The second and third time through the material yields progressively more depth of comprehension.

All of the Ascended Master instruction provided here has come in the form of lectures spoken by the Masters and termed by them, “Dictations”. These are spoken in the language of “Living Light” and do contain many special keys that have been scientifically placed there for each student.

Using the science of “Fohat”, the Masters embed “Light Codes” into the dictations which we receive when we hear or read the transcribed material. These “Fohatic Keys” are specially designed to unlock aspects of our consciousness and produce wondrous effects in our world. 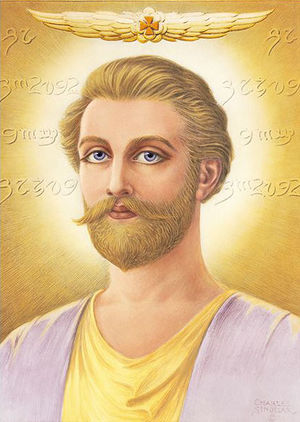 Fohatic Keys are seen in the air behind Saint Germain in this portrait. They are in Atlantean script. Fohatic Keys are described by Saint Germain as “Cups of Light”. They may be encoded in many forms using Angelic languages unknown to us. Each one is a vibrational code. Like a seed which unfolds to produce a creation.

The Masters embed these “Light Codes” into their dictations and we receive them when we hear, watch, or read the dictations. They become infused into our aura and our consciousness. Then they begin to germinate and unlock their programming. This is “Living Light” with an extraordinary purpose. Each Key is designed specifically for each person who will receive it. The Masters already know who will receive the dictations because they operate beyond time and space. They are that sentient!

The dictations get transcribed into printed form and published as “Pearls of WisdomTM”.

Pearls contain the Fohatic Keys in a largely potential form. Some of the Light is released by reading the Pearl because as your consciousness engages with the material, your mind is accessing the mind of the Master who gave the dictation. Most of the Light however remains locked, unavailable, until it is released by the Science of the Spoken Word. This is the purpose and function of the “Pearl Call” as explained by El Morya.

There is an order to all of cosmos. There is an order to the Path of Initiation leading to the Ascension. You must walk before you can run. You must build wisely as a “Master Builder”. You don’t build towers upon wobbly foundations. Therefore, consider that there are certain dictations that should be assimilated before more advanced material can be properly dealt with. This is only logical. This is the purpose of the “Four Pillars”. The dictations which comprise the chapters of the books were originally published as “Pearls of WisdomTM” before they were collected into books. They were intended to be read and digested and reviewed a few times in a particular order. These “Four Pillars” are prerequisite to all that you will build in the coming years of your Chelaship. You want a solid foundation, you are building the “Pyramid of your Life”. Consider that these foundational dictations contain the reinforcement to ensure a solid base.

Reading the books that are the “Four Pillars ” is most effective when using the “Pearl Call” after reading each chapter. This is true for all authentic Ascended Master literature that was released as a “Dictation”. This includes the “I AM Discourses” published by the Saint Germain Foundation.

In the name of Beloved Lord Maitreya, El Morya and Guru Ma,
I ask and command my I AM Presence and Beloved...

(Insert name of Master whose Pearl I just read)

[Beloved El Morya, POW 2/31, 8/7/59]: "Only ABOUT TEN PERCENT of the BLESSINGS received from the service of "the Pearls" IS IN THE READING thereof. While your ATTENTION is upon OUR WORDS - we are FLOODING LIGHT'S PERFECTION FROM OUR WORLDS INTO YOURS! Precious friends of light you really are - right here in their physical appearance world! By your rhythmic and faithful attention to us and our words, YOU MAKE YOURSELVES OPEN DOORS AND CHANNELS FOR OUR LIGHT AND ASSISTANCE to flow not only to but through you INTO THE WORLDS OF THOSE AROUND YOU."